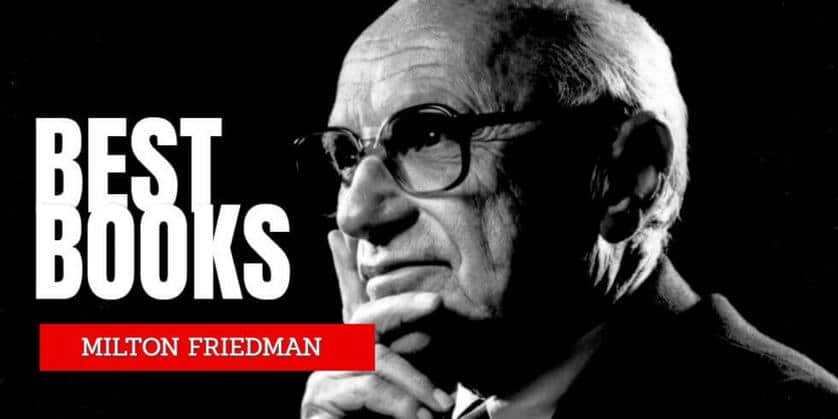 Economic policy has an enormous influence on our lives whether it be in business, investments, where we live, what we buy, etc. In fact, the authors of Common-Sense Economics write “our democracy puts voters in charge of choosing our policymakers, so the consequences of economic illiteracy can be disastrous. People who do not understand the sources of economic prosperity are susceptible to schemes that undermine their own prosperity and their country’s prosperity.” What are the best books by Milton Friedman? Who was Milton Friedman? What is Milton Friedman best known for?

In this article we will cover the following topics;

Who was Milton Friedman?

Milton Friedman was a free-market economist who received the 1976 Nobel Memorial Prize in Economic Sciences, an advisor to President Ronald Reagan and Prime Minister Margaret Thatcher. According to The Economist he is considered “the most influential economist of the second half of the 20th century.” Friedman’s work and ideas include monetary policy, privatization, deregulation, and taxation had an impact on government influences, i.e. the Federal Reserve’s response to the financial crisis of 2007 – 2008. Friedman’s work includes numerous books, papers, magazine columns, monographs, scholarly articles and journals, lectures, and even television appearances.

What is Milton Friedman Best Known For?

When Capital and Freedom first was released (1962), this book was spurned and hated for many decades by the intellectual community. During the 60s, Friedman was once attached by a liberal during a debate for simply reciting his views of what he believed the proper role of government is to be. This out lashed continued until he recited his views on the opposition to the military draft, therefore, bring an unexpected cheer of the college students. Much of Friedman’s thoughts remained controversial since the release of his book. Nevertheless, its impact remains heavily on the world today.

In this book, Friedman explores ideas of political support for the government to control the economy stems from the Great Depression. He also advocates that parents should be given vouchers to place their children to the school they wish. Friedman dismantles the idea that social security is just a government-mandated contribution to a public pension fund. And the FCC control of television and radio is poor economics and an abridgment of the freedom of speech. Further, Friedman explains that the social responsibility of businesses is to operate within the law to make a profit. Friedman also explains that the Federal Reserve System responded to the 1929 crash of the stock market by drastically cutting the money supply. Further, Friedman advocates for conservative economic policies in his view of the role of government in a free society. He also believes that the role of government to intervene in economic affairs to ensure “economic growth” and “full employment.”

2 – Free to Choose: A Personal Statement

Friedman was a great communicator, able to influence politicians, economists, and readers of his books on his economic and political theories. Decades after its release to the public, Free to Choose: A Personal Statement, written with his wife, also economist Rose Friedman, serves as an exceptional book for those on the political right. Friedman’s criticism of the Fed in the 80s would insist that he would favor easing in principle, but how much quantitative easing would he approve? Friedman’s thoughts consist that the blame of the Great Depression was due to the Federal Reserve’s failure to act, thereby, not addressing the drop in the number of dollars circulating in the economy.

The book further discusses deflation in the 1930s; the Great Depression and the failure of government; inflation in the 1970s and government’s price and wage controls; special interest and the fact that groups’ interest can weaken the political system; big government and its impact on the economy; the market is the best protection; and desirable solutions to these problems.

3 – A Program for Monetary Stability

to see how it works. It further examines the role of government and how much it should play in the role of economics and monetary policies; and how much guidance for those who are granted monetary authority. The book is logical and simple and a powerful theoretical statement on economic monetary stability.

4 – Tyranny of the Status Quo

Friedman’s book, Free to Choose was an international bestseller in the 80s. Its message impacted world leaders including Margaret Thatcher and Ronald Reagan. In that book,

Friedman discusses how a free market encourages people to make the best out of their ambitions and talents. In The Tyranny of the Status Quo, Friedman explores the political phenomenon that the government tends to reverse declared policies regardless of party affiliation. Following the election of Ronal Reagan and Margaret Thatcher who initiated big changes, became frustrated by the “Iron Triangle” which preserves the status quo. This triangle is the beneficiaries of laws and the bureaucrats who drive and thrive on them, and the politicians who seek votes.

Harry G. Johnson writes in the 1965 June issue of the Economic Journal about his review of A Monetary History of the United States 1867 – 1960 which he says,

The long-awaited monetary history of the United States by Friedman and Schwartz is in every sense of the term a monumental scholarly achievement, monumental in its sheer bulk, monumental in the definitiveness of its treatment of innumerable issues, large and small, monumental, above all, in the theoretical and statistical effort and ingenuity that have been brought to bear on the solution of complex subtle economic issue.

Both Friedman and Schwartz use an enormous amount of historical data and analytics to support the claim that monetary policy impacts the management of the money supply. In this book, Friedman and Schwartz tackles the Greenback period; the silver politics and the secular decline in prices of 1879 – 1897; the gold inflation and banking reform of 1897 – 1914; the early years of the Federal Reserve System from 1914 – 1921; the high tide of the Federal Reserve System from 1921 – 1929; the Great Contraction from 1929 – 1933; the cyclical changes from 1933 – 1941; the World War II inflation from 1939 – 1948; and the postwar in velocity. This book is insightful and impactful in understanding the monetary history of the United States.

6 – Why Government is the Problem

Milton Friedman’s Why Government is the Problem is a book on major social problems in the United States. Friedman discusses topics on education, lawlessness and crime, the collapse of family values, homelessness, and the health care crisis is all believed by Friedman to be

the result of the actions of the government. Through the power of special interest groups that benefit from the actions of the government is part of the answer. Friedman discusses the bigger fundamental difference between the self-interest of the individual when they are engaged in the private sector verse the self-interest of those same individuals when engaged in government. Friedman points out that the result of where the government is no longer described as a government “of the people, by the people and for the people,” but “of the people, by the bureaucrats, and for the bureaucrats.” Very engaging book on Friedman’s thoughts of Why Government is the Problem.

In Milton Friedman’s Money Mischief: Episodes in Monetary History, Friedman discusses the creation of value: from stones to feathers to gold. Friedman makes it clear that through historical events the mischief may result in not understanding the monetary system. And that no one is immune from economic monetary systems and the effects of its practices and theories.

Friedman does an excellent job keeping you hooked until the last chapter. There are many great things about this book. Beginning with the concept of stone money on the island of Yap, to an analogy of throwing money into a community from a helicopter, and the story of Silver and Gold.

Friedman further explores that prices either transmit information, incentivize owners to follow the information, and incentivize users to be guided by this information. Further, economics is not entirely concerned with economic problems, but it is also a social science. Price Theory is concerned with not with problems of economics but also how society solves those economic problems. Friedman’s book provides a theoretical underpinning to understanding prices.

In A Monetary History of the United States, 1867 – 1960, published in 1963, stands alone as one of the most influential books in the economics of the twentieth century. The chapter

entitled “The Great Contraction, 1929 – 1933” addresses central economic events of the Great Depression. The Great Contraction, 1929 – 1933 was published in 1965 as a standalone paperback that argues that the Federal Reserve failed to exercise its role in monetary policy that reflected in the severity of the Great Depression. The book clearly identifies the school of thought that emphasizes the importance of money supply within the economy.

“I am in favor of cutting taxes under any circumstances and for any excuse, for any reason, whenever it’s possible.”

“Inflation is taxation without legislation.”

“Nothing is so permanent as a temporary government program.”

“There’s no such thing as a free lunch.”

“If you put the federal government in charge of the Sahara Desert, in 5 years there’d be a shortage of sand.”

“Most economic fallacies derive from the tendency to assume that there is a fixed pie, that one party can gain only at the expense of another.”

“The government solution to the problem is usually as bad as the problem.”

“The great achievements of civilization have not come from government bureaus. Einstein didn’t construct his theory under order from a bureaucrat. Henry Ford didn’t revolutionize the automobile industry that way.”

“The Great Depression, like most other periods of severe unemployment, was produced by government mismanagement rather than by any inherent instability of the private economy.”

“The most important single central fact about a free market is that no exchange takes place unless both parties benefit.”

Milton Friedman was an American Nobel Laureate economist and an influential thinker. In 1976 he was awarded the Nobel Price in Economics for his dedication and exemplary achievements in the fields of monetary theory and history, consumption analysis, and the complexity of stabilization policy. Friedman was a strong advocate of free markets and according to The Economist, “was the most influential economist of the second half of the 20th century.” The best books by Milton Friedman is list exclusively by the author and the author’s opinions.